I was offered a job in the Marshall Islands to be the digital imager at the Kwajalein Missile Range Photolab in 1999. The Marshall Islands are half way between Hawaii and Australia, 7 degrees above the equator, if you were wondering where the heck they are. The island of Kwajalein is in the Kwajalein Atoll, one of the 29 atolls and 5 major islands that make up the Republic of the Marshall Islands. The island of Kwajalein is 3 miles long by a half-mile wide at the very widest. Below are two shots I took of the island in May of 2000. In the image on the right, you can see how the islands in an atoll are like the pearls in a string of pearls, with the reef connecting the islands. The reef and islands are formed on the tops of ancient volcanoes. The lagoon on the inside of the atoll is the inside of the volcano - and the Kwajalein Lagoon is the largest lagoon in the world. Both images show the airstrip that takes up a good bit of the island 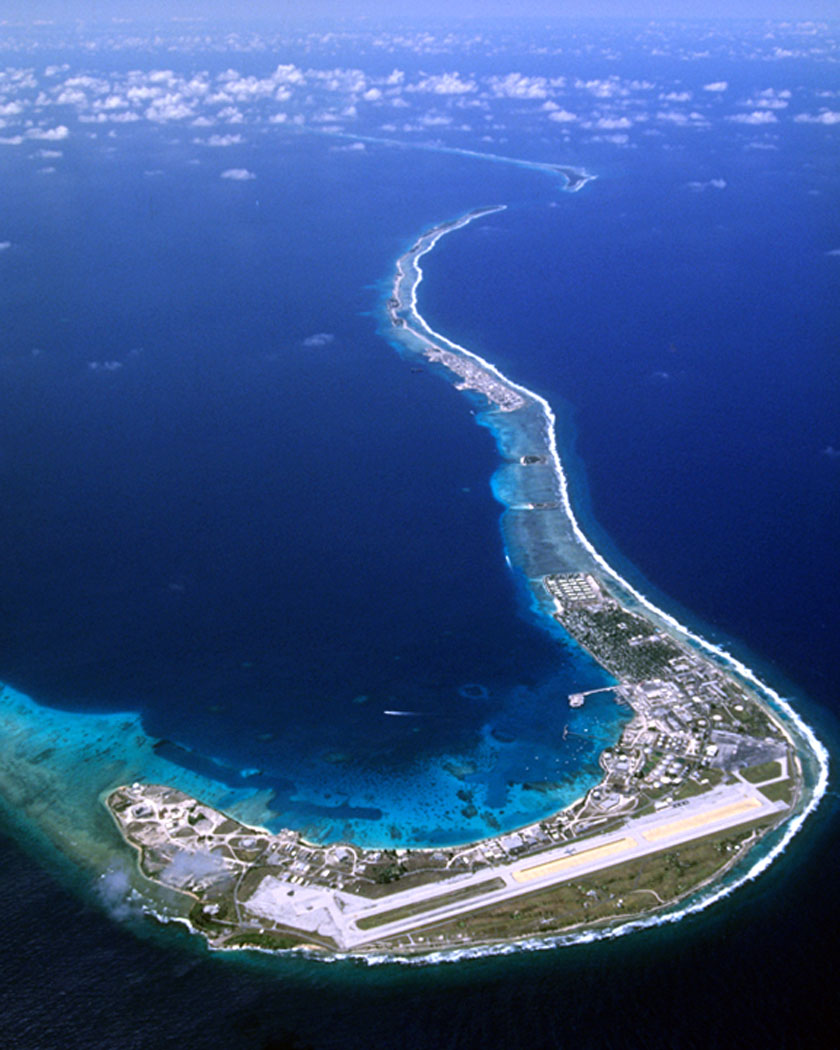 Of course I took the job - how could I not? Live and work in the middle of the Pacific? OK - so my job was basically to make eye-candy images for US Space and Missile Defense. However, I finally had one job in one place that was in close proximity to where I lived (20 minutes by bicycle), which meant I would FINALLY be able to work on the rodeo book!

The universe had other plans. Within weeks of my arriving at the Photolab, it was discovered by various contractors and entities on the island that I had a talent for scanning and printing that heretofore had not existed on the island. I believe that it was personel at MIT's Lincoln Labs who informed the folks at the Marshallese Cultural Center and soon the Photolab was outputting large panels of graphic timelines of Marshallese history for Manit (Culture) Day festivities. Over the next months I got to do a lot of scanning for the Cultural Center in between missions. In the Spring, two American women, Helen Claire Sievers and Cris Lindborg, who had both lived on the island quite a few years, were in Majuro, the capital island / atoll and met with Leonard deBrum. Leonard's father, Joachim deBrum, had learned photography in the 1880's and had set about documenting his culture for the next 50 years on glass plate negatives. The plates were sitting in the Alele Museum and Leonard was concerned that the images his father took might be lost once he was deceased. Cris and Helen Claire told him that there was someone on the island (that would be me) who knew how to work with glass plate negatives and they brought some of the images back with them. I knew, from researching the Marshalls before I took the job, that there were glass plate negatives in the Alele Museum, but I incorrectly assumed they were taken by a traveling photographer in an expedition. I was presented with the images Leonard had sent back and was, naturally, hooked. I was thunder struck that someone had learned photography out there, in the middle of serious nowhere, then had built a darkroom and got his supplies from visiting sea captains. I digitized the images he sent up and digitally repaired some of the images to print. Helen Claire and I wrote a grant proposal for the equipment needed to digitize glass plate negatives. Less than a month after I was first presented with the deBrum images Helen Claire and I were on a flight to Majuro. It was July 4th weekend of 2000 and I was about to embark on a whirlwind tour on Majuro. Anyone who knows Helen Claire, knows she's a force of nature - I found out that she also doesn't sleep! We had a kemem (first birthday party) to go to, meetings with various and sundry people for a million different reasons as well as the one with Leonard deBrum and his family in regards to his fathers glass plate negatives. I didn't have any way of knowing exactly what the situation with the glass plates was, but I was about to find out that there wasn't going to be anything simple about taking on the task. We did have a good meeting and the next day we got word that Leonard wanted me to take on digitizing the glass plates and that we could apply for the grant.

Suffice to say, we got the grant and I began digitizing the glass plate negatives in the evenings and on weekends. I randomly picked a stack and started to scan. There ended up being over 2000 that I could find. The story that began to unfold for me was that of the Marshall Islands through the eyes of Joachim deBrum. A first-generation half-caste Marshallese and Portuguese from the Azores. Because I am a documentary photographer also, I figured out things that Joachim was doing to document his culture - the way to make food, build boats, his family and friends. Joachim documented over a 50 year period.. Every few months I would go down to Majuro and sit with Leonard in his house - always red-faced and sweating because of the heat - and write down or record the stories that went with each photograph if there was one. I would also talk to other family members and learn what I could from them about the families up on Likiep, the atoll where Joachim's father Jose and his partner Adolph Capelle eventually settled. I was always trying to put the puzzle pieces together: Joachim documented from the end of the traditional time, thoughout the German period and during the Japanese. Joachim had died in 1937 - so before WW2 - when Leonard had to sneak back on to the island at night and rescue the glass plate negatives - sailing back to a small island in the atoll and burying them for the rest of the war.The stories are practically endless. Here are just a sampling of some of Joachim images. 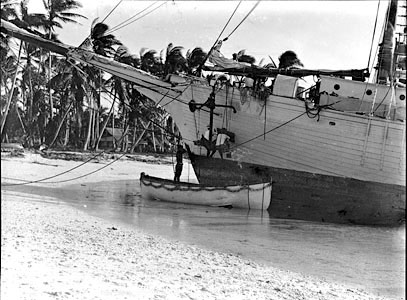 A copra ship pulled into Likiep Lagoon. The reason that Adolphe Capelle and Jose deBrum chose this atoll was because they could have ships sail right up to the beach and tie off on the coconut palms. 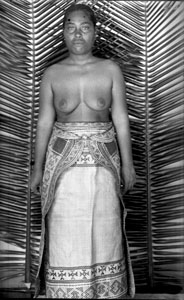 Joachim's Auntie Neimon in a nieded - the traditional matt skirt worn by women before the missionaries. Note the palm fronds for backdrop. 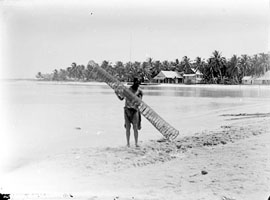 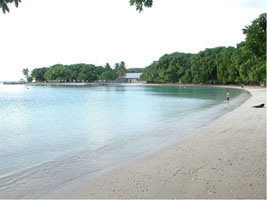 This is Likiep Lagoon - taken by Joachim on the left, with a man holding a style of fish trap, and by me on the right, from approximately the same vantage point. You can see the foundation for the Capelle office as well as the remains of what is called the Spanish pier in my image.

When I went down to work with Leonard on Majuro I would always try and fit in a trip down to Laura on the far tip of the island with an iced coffee - from Thuy's or the Long Island Hotel. The film below was one trip with my friend Judy and the song "Almost Paradise" really was playing on the radio of the car.

A drive on the island of Majuro between the areas of Ajeltake and Laura.